I live in Kentucky.  Beautiful, green, terrain that goes from flat in the west to rolling hills then to mountains in the east.

See?  This picture was taken by my talented daughter  in my driveway  last year just as the leaves started to turn.

I love to travel, but I think Kentucky is about the prettiest place on earth.

I just returned from Nevada – Las Vegas, actually.  Now, Las Vegas has it’s share of lights and glitter and glamour.  It sure impressed me! But it doesn’t have much green.  It has desert.  Lots of desert.  See? 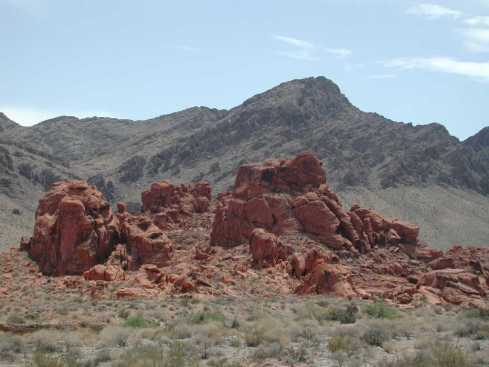 If it wasn’t for the red rocks in Nevada’s Land of Fire state park, the entire landscape would be gray.  Most of the rest of the area we saw was like the background in this photo. Not green.  No trees, hardly any plants at all, and most of those were rather gray-green.. It was pretty in its own way, I suppose, but it was rather uniform.  The mountains were nice, but they were just a darker shade of gray.  The red rocks at the park  were nice, but it sure was hot. Desolate.  I kept waiting for someone like John Wayne to meander up on his horse looking for water, and then the director to yell, “CUT!”

It made me think about the kid who grows up in Nevada and goes to the east for the first time ever.  What would he think of all that green? And trees? And ample water?  We tend to think of people coming to America from foreign countries and wondering what they think of this land, but what about our own?  We are just as diverse, landscape wise, and experience wise. Yet we assume, unwisely, that we are alike, because we are Americans.

It’s cool to live in a county with so much diversity.  Now if we could just start to appreciate it in all its forms.  From culture, to landscape.  From skin color to economic circumstance.  What a wonderful place this would be.